skip to main | skip to sidebar

The typical grandparent in the study is a grandmother over the age of 65 who has four
grandchildren between the ages of 5 and 17, and while one lives within 50 miles, she
also has at least one living more than 500 miles away. She is retired and most enjoys
communicating with her grandchildren on the phone and rarely sends letters through the
mail. She doesn’t live in a multi-generational household or have grandchildren living with
her, but has several friends who do. She occasionally provides care for her grandchildren
and does so more than her husband. When she does care for her grandchildren, her
primary motivation is that she enjoys it.
She loves to have family celebrations with her grandchildren and enjoys going out to eat
with them when they are together. She sees her older grandchildren mostly at family
celebrations. She knows about Grandparents Day, but her grandchildren don’t do anything
special to celebrate it.
Passing down values to her children and grandchildren is important, and honesty is the
most important value. She actively volunteers in her community at local non-profit
organizations or in her faith-based community. Civic engagement is important to her and
she votes regularly, attends community planning meetings, and occasionally campaigns for
her favored candidate or works at the local polls.
She is more likely to have provided financial assistance to grandchildren than her husband,
and is most likely to buy clothing for grandchildren. She may be giving more due to the
current economic situation, and she prefers to provide smaller gifts over the course of a
lifetime to help meet her grandchildren’s current needs rather than leave them a large sum
after she dies. She rarely gives financial advice to grandchildren, but when she does she
urges them to start saving early and avoid debt. She sometimes urges them to think about
financial security and planning, especially her older grandchildren.
If she worked outside the home, she is more likely to have done so with the purpose of
making a difference in the world than her husband (a value she also hopes will be part of
her legacy for grandchildren). At the same time, making money to support her family was
also very important to her and she wants her grandchildren to remember her for providing
for her family — even in tough times. She has around $150,000 in life insurance (with her
spouse as beneficiary), but is less likely to own most financial products than her husband,
with the exception of long-term care insurance.
She is optimistic about the future for her grandchildren — believing that they will live as
well as she and her husband have because they have access to a good education and have
been instilled with good values and family support. She wants her grandchildren to be selfsufficient,
get a college education, and have good health habits. She generally believes her
children are good parents who provide a strong support for her grandchildren. She is
perhaps a bit partial when it comes to her grandchildren, often seeing them as hard
working, caring, and possessing good personalities…to her they are all beautiful children.
Posted by Israel (Issi) Doron at 8:53 אין תגובות: 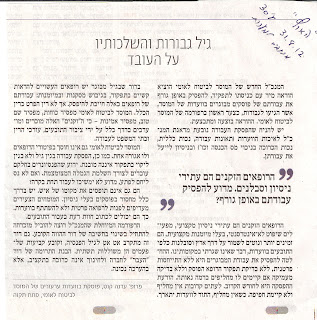 Israel (Issi) Doron
Law professor, Full Professor at Haifa University, Israel. Chair of "Law in the Service of the Elderly" and Past President of the Israeli Gerontological Association.